Do you leave a tip?

When visiting a bar or restaurant in Spain it is customary to leave a tip. I have heard from waiters/waitresses that in some restaurants and bars in the local area tipping is very bad and minimal tips are given. In others the restaurant owners take a percentage. There are many questions that arise regarding leaving a tip.

In general the wages for waiting and bar staff in restaurants are minimal and they rely on tips to bring their wage up to the necessary level for general living. Management and chefs etc. normally receive a higher wage so are not so reliant on tips.

It is thought that the term TIP originated back in the 17th century in the taverns in England, where customers would “slip” money to their server “To Insure Promptness (promptitude)”, meaning they would get special and fast service. This TIP was traditionally given before service. It was soon taken to America and the idea was adapted by the establishments so they could pay less wages to black or unskilled staff in the event that they would give good service to get extra money (a bonus). The good service being that which is provided at your table by your server. It has since been expanded to include giving this bonus to the chef, pot washer, management etc. We can all see the reasoning behind this and in most circumstances, this is a fair policy.

What exactly is “Service Charge”

In some local restaurants you may see an item on your bill at the end of your meal that states “service charge” or similar. This can be anything from 5% to 15%. Is this a replacement of the tip? Not really – of course the service charge added to a bill should be optional and you can choose/ask to have it removed if you wish. If it is added on your bill and you choose to pay it then how does the waitress that served you so well actually get her “bonus”? A service charge added to a bill can mean that some goes towards a tip for the waiter but many establishments may take a percentage of this for themselves to cover costs of breakages, credit card processing fees, restaurant wear and tear etc.

Most people rightly feel that a “service charge” added to your bill is solely for the server. It is a charge for the service. It is not an extra charge for the chef cooking the fish really well, after all that is his job and what he gets paid for, and why you are paying 17,50€ for a piece of fish that cost 4€ from the fish market. 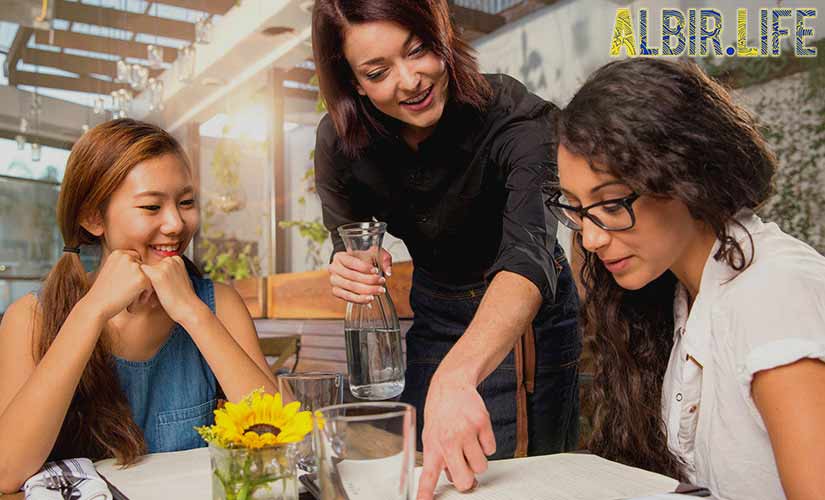 Should you leave a tip? Well it all depends on the factors above really. If the given tips all go into a pot to be shared amongst all staff at the end of the week/month then many people will not leave a tip. Many diners and drinkers feel much more comfortable giving a tip for a particular waiters’ good service directly to the server. It is a servers job to bring you the food and drink, this is included in the price of your meal. How they perform their job can be varied and what a tip will do is reward good service, friendliness and encourage further improvement. It can also make lesser skilled/experienced waiters and waitresses “up their game”. As a minimum, if your server has been prompt and polite, attentive to your needs and requests, got your order correct, made you smile, been interactive with your group then a tip should be forthcoming.

How much do I tip? There is no correct answer to this but the current INTERNATIONAL standard would be as follows:

In Spain the tips generally seem to be a lot less, and around 10% of the total bill is common. This tip should always be given, rather than skipped. After all this is part of your server’s wage. If you have received bad service and really do not want to leave a tip then it is better for you to speak with the restaurant manager to highlight your concerns, rather than just walking out and leaving no tip at all. This does not benefit anyone.

Some people just tend to leave what ever small change they have left in their pocket. It has been reported by a waiter friend of mine that a 42 cent tip was left on the table following a meal for 4 people where the total bill came to over 120€. This is not something that should ever be contemplated, it can be quite insulting for the server and will ensure you are talked about. If you are going to leave a tip then make it around 10% of your bill, if not then speak to the management to help them improve the service.

Tips given on credit card

A tip should in reality never be added as an extra on your credit card payment. Tips should be cash payments left on the table, or given specifically to your server. Tips given on card payments go directly into the bank of the business, or the owner. How does the server get this money, if they ever do. How is it calculated, who pays the tax on this payment.

Lots of things to think about here, and most people will have their own opinion of how, when and what to tip. But if you have taken the time to read this, then please when you next visit a restaurant have a think about your tip and make your server happy and encourage him/her to keep up the good work.